Off to see some more ancient temples!  We had the tuk-tuk driver drop us off at Angkor Wat so we could enjoy some extra walking.

We went on a hike to the Angkor Wat viewpoint. It can be packed at times (such as at sunrise), but when we went there was almost nobody there. It was a lovely hike and the viewpoint was awesome. I didn’t try to get a photo of Angkor Wat from the view point because it’s actually REALLY tiny from the viewpoint and smoggy enough that you can hardly see it. But I highlighted a few other random things.

This is at the top of the viewpoint.  There is a lot of restoration work being done on different temples and it’s interesting to see the process.

I bet you can’t find the gecko in the photo below! (If you’re genuinely intrigued and stumped, you can ask for a hint.)

We passed by this temple from the 10th century. It had a VERY steep staircase as well as an area in front of it that looked as if it were a pool at some point in time.  I seriously love the look of such old structures and think it’s amazing how they have held up. 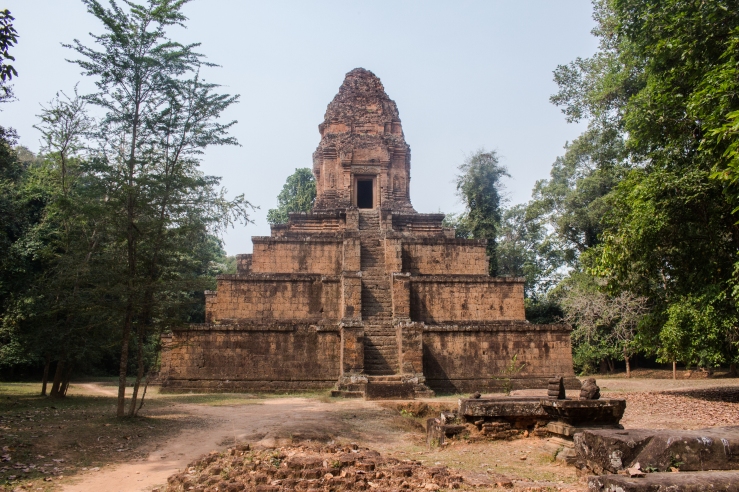 We then headed on to the major attractions of our day: Prasat Bayon. (we also planned to hit up Ta Prohm today… but umm… more on that later…)

An impressive display alongside the bridge headed closer towards the temples.

We could have easily taken a tuk-tuk straight to the temple, but there were a lot of fun things that we’d have missed. Walking was worth it. (mostly. again, more on that later…)

…who had a baby with her!  The baby clinging onto its mother was seriously one of the cutest animal interactions I’ve ever seen.

Though some monkeys are indifferent and even friendly (hence the monk feeding the momma monkey), they aren’t all that way and you have to give them space.  But I thought the sign was a little intimidating… 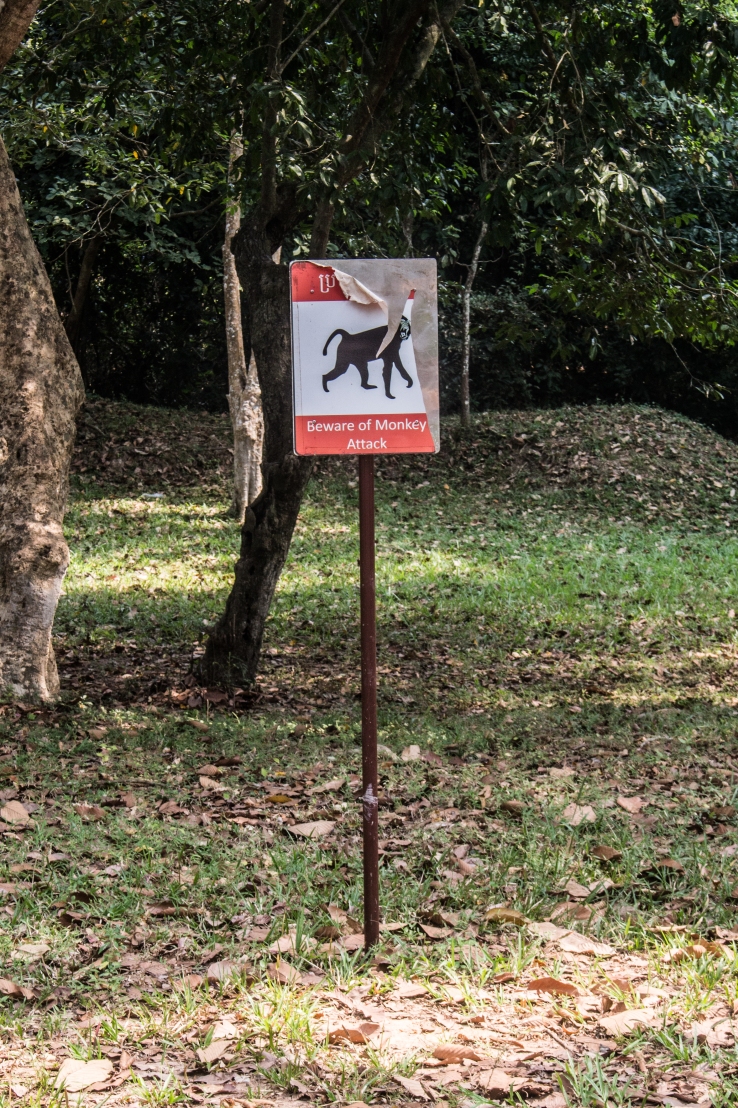 Okay.  So. Let’s talk about BUTTERFLIES…

They are ALL OVER THE PLACE around the temples.  We passed by this picnic blanket where literally dozens of them were hanging out and fluttering around.  Now, not all of you may know this, but I have a serious phobia of butterflies (and moths – it was moths that traumatized me and sparked the phobia).  It’s pretty easy to avoid them, except for the rogue moth that appears in our apartment every once in a while. But I knew going into this trip that I’d see some butterflies at some point and would have to deal with it.  So I plunged right in and stood by the picnic blanket and let them fly around me!  And soothed myself by saying “they are PRETTY, they are so PRETTY…” I actually did pretty well! I wasn’t running across the street screaming or flailing my arms around or passing out.  I had some mountainous goosebumps on my body and it really gave me the eebie jeebies, but I think some progress was made.

As in, I was able to take a picture of a butterfly for the first time…. ever?

It’s a big deal, you guys. I feel ridiculous about how big of a deal it is and how scary I find butterflies, but hi, welcome to my illogical life!

We also spotted a cute pig hanging out in a mud puddle in some nice shade. 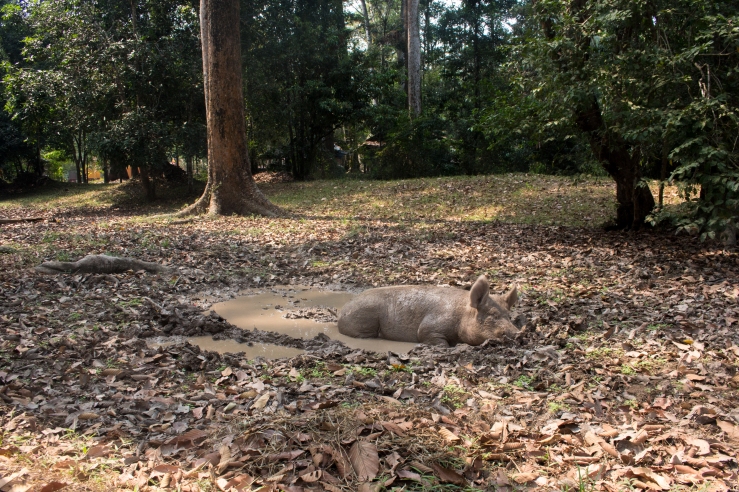 I wanted to get closer, but Jennifer advised me not to.  Probably the smart thing to do.

Guys, I took ANOTHER PICTURE OF A BUTTERFLY.  Also, part of the significant achievement is that I have actual photographs of butterflies on my computer and I even spent time doing minor EDITING on them.  Do you know how much time was spent voluntarily looking at butterflies?  I’m pushing myself hardcore and I hope the “healing process” works long-term!

We finally made it to Prasat Bayon, and it was massive. And of course we took our sweet time leisurely wandering through the temple.  It’s beautiful.

I may have mentioned this before, but I feel weird about trying to photograph things like this because there are much more professional photographs available EVERYWHERE.  Plus, lighting is poor in the middle of the day in a sunny climate and I just don’t have a lot of motivation to pull out my camera.  But Jennifer reminds me that it’s capturing my specific experience, and that’s important!  Looking at these photos will mentally put me back in those places better than anything someone else has published online. 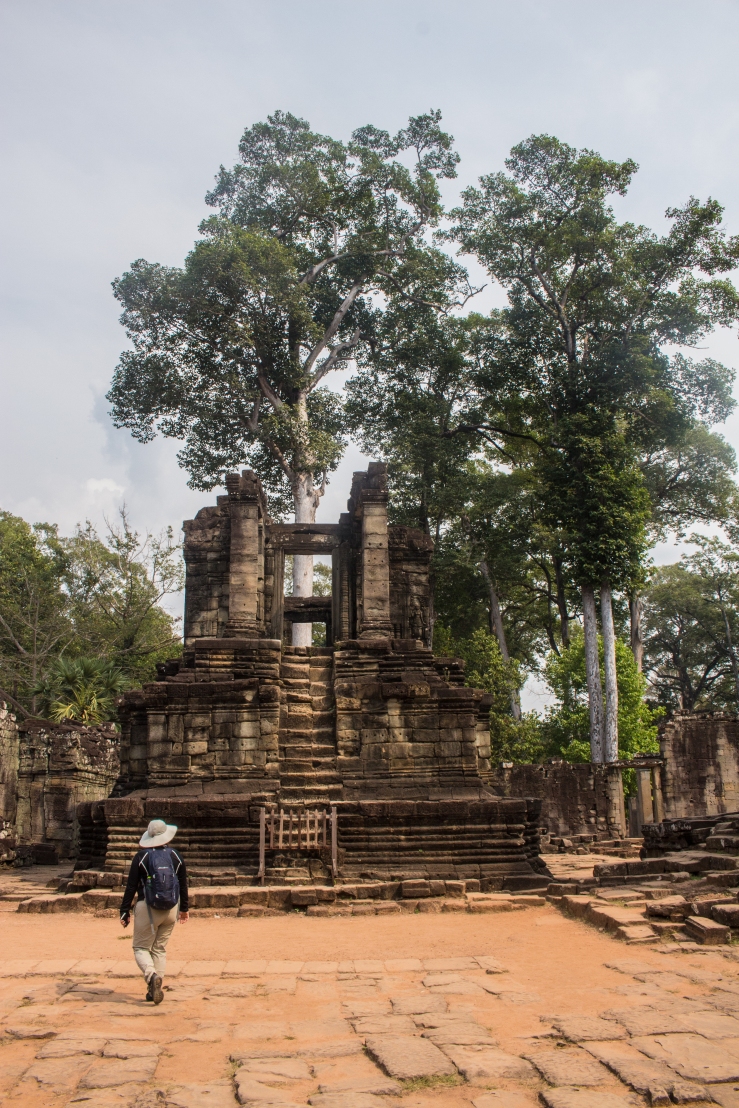 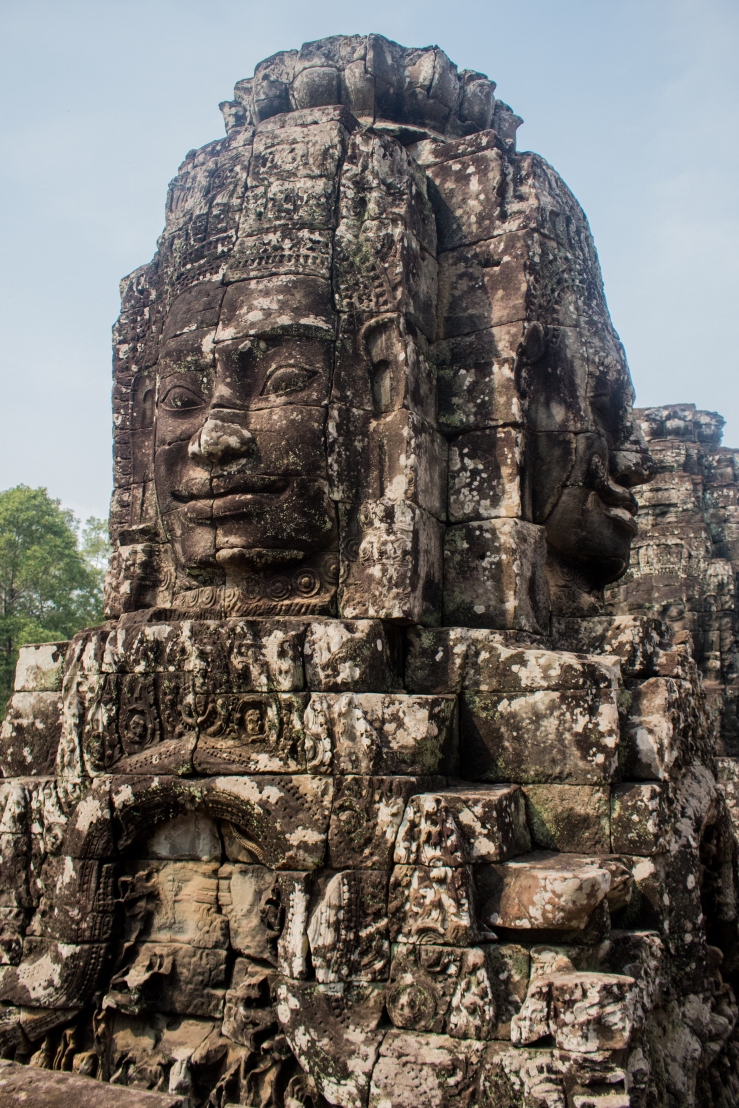 The giant faces are what this temple is so famous for.  It’s incredible!

Seriously, they’ve got way more style and class than I’ll ever have!

This monkey is munching on some fresh fruit, which he likely stole from a tourist:

And speaking of which: the monkey below got frustrated at his coconut and eventually spotted a tourist who had just purchased some fresh fruit in a bag, took off across the street, and jumped around her while swatting at the bag until she gave in and let him have it!  These little guys know what they are doing.  (And it made me change my mind about getting some fresh pineapple myself!)

We spent some time relaxing outside the temple after spending several hours inside.  So did many others.

So, about that plan we had to do a ton of stuff today……

Yep, I felt like I got hit with a ton of bricks and realized I’d not be able to go visit anymore sites without being tremendously grumpy and out-of-it.  We were literally on our way, and about halfway, to Ta Prohm (the sight I’ve been most excited about), and I was like, nope, I can’t do this, I’m going to be miserable. I’m tired, I’m sweaty, my brain is fried, and I could pass out if I go for another hour. I really felt awful about it but it ended up being a fun way to end the day. Haha. And we did end up finding a tuk-tuk driver right after that video. (Of course.)

“I think today was my favorite day so far.” -Jennifer