Today was a bit of a lazy day.  But we both got to do some cool stuff regardless!

As you may know, I have bipolar disorder 2.  I am on medication that has been incredibly successful for me, but it doesn’t completely erase changes in my mood.  It keeps me a balanced, stable, and functional human being, and I very rarely deal with major issues.  But if I were to take enough medication to prevent any mood swings, my moods would be traveling in a flat line and it wouldn’t be healthy.

ANYway, the past couple of days I’ve felt a little bit of a depressive episode.  I don’t feel hopeless or dark – I just feel like staying in bed and it makes me a little more tired and anxious.  That said, I’ve been doing a surprising amount of stuff despite it.  It’s possible that it could get worse, but it’s hard to say!  Traveling is actually quite nice because even if I don’t *feel* like doing things, my head knows that I want to be doing things and it gets me out of bed.  It does mean I won’t do as much, but doing anything at all is a success for me. 🙂

Back to today’s events…

Durian is prohibited in a lot of buildings and modes of transportation. It’s pretty hilarious (and very very wise).

Jennifer and I spent the first half of the day doing separate things – we have accepted the fact that she is a morning person and I am a night person, thus doing “big things” in the morning does not work with my brain. I like being able to sleep in later and take it slow in the morning. It’s been fun and I can see how much I’ve grown over the course of the trip – suddenly I am taking public transportation and exploring cities and using Uber all by myself.  That may be an easy feat for some, but for me it is uncharted territory. And it is rewarding.

Chinatown has a lot of tea shops and I enjoyed taking my time smelling teas, reading labels, and studying beautiful teacups.  (I spent so long window shopping at one place that the owners made me some tea!) 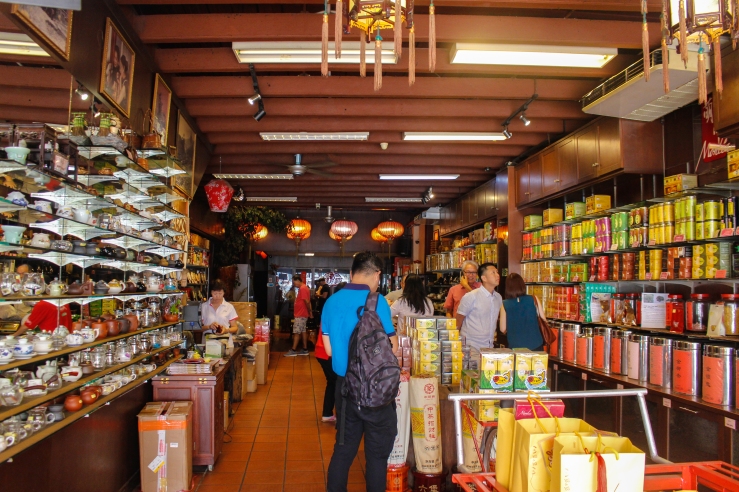 There are so many shops filled with things I’ve never seen.  If I were rich and had 3 hands I’d buy two more suitcases and take home so many things. Haha. I frequent Asian markets at home, so it’s really exciting to find so many products I’ve never seen before.

There are so many lovely things to see! 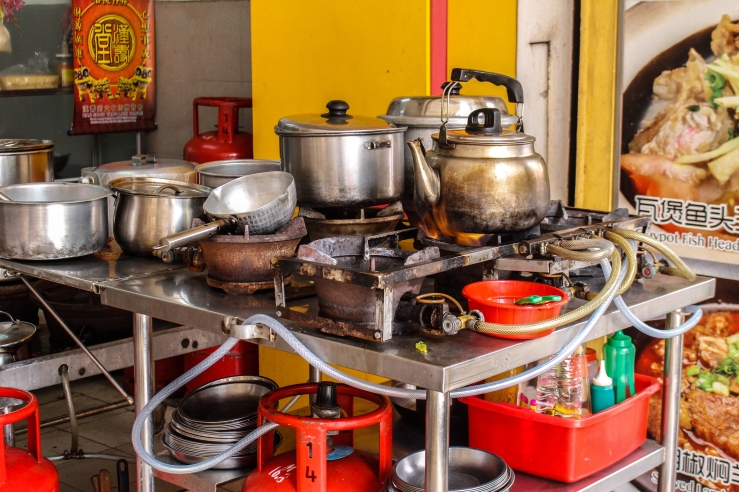 Jennifer and I met back up at lunchtime and had some delicious fresh juices, hummus, baba ganoush, falafel… I kinda forgot to take pictures of it all but man was it delicious.

With Malaysia being a Muslim-majority country, it’s been fascinating to see the influence it has on little things.

We decided to go to the Batu Caves, which are literally temples built in caves.  It involved finding some public transportation, so we headed that way… 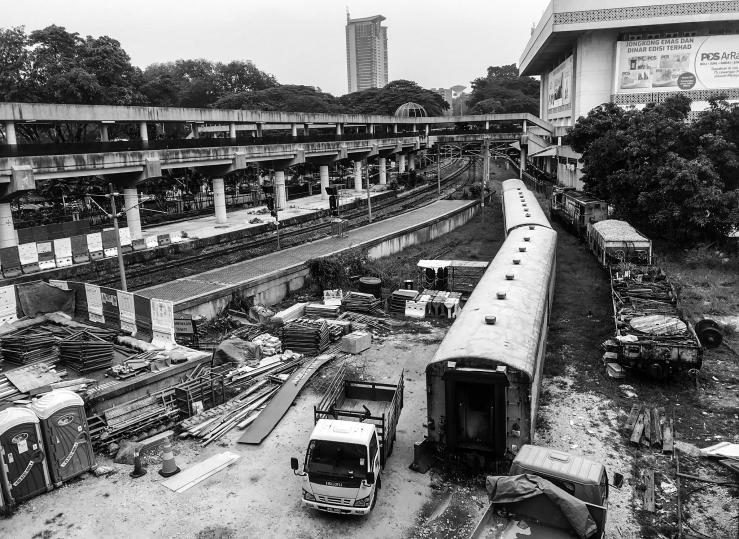 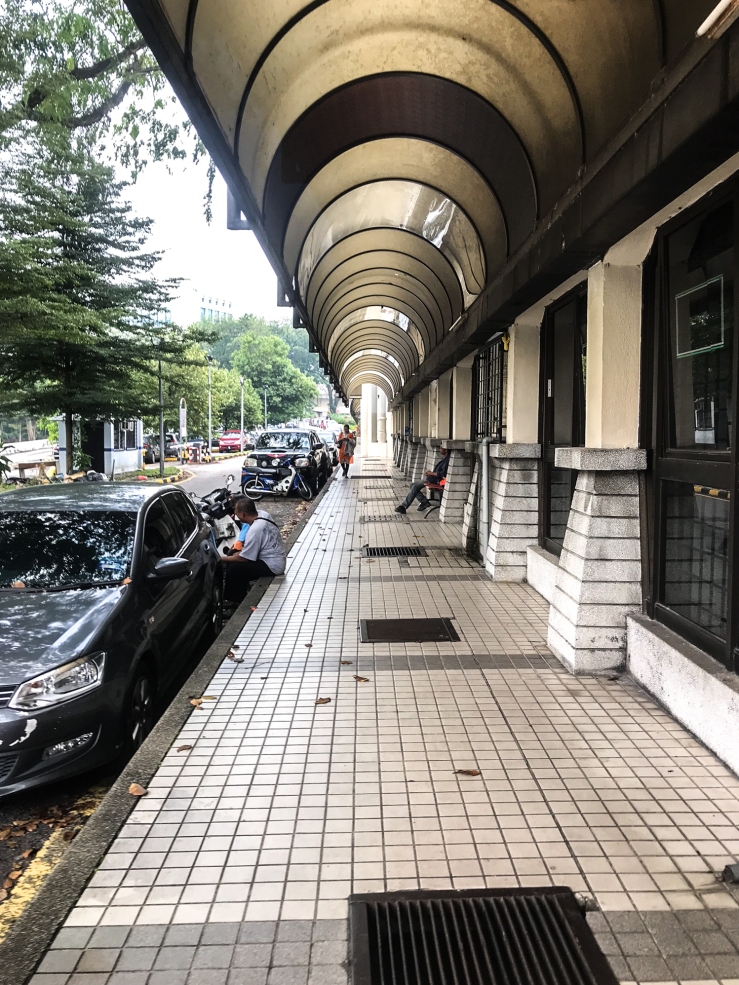 …only to find out that the station was no longer sending a subway to the caves and that it required quite the extensive journey. Sigh…

At this point, by the time we actually got there we’d not have a lot of sunlight left, so we decided to do it tomorrow! 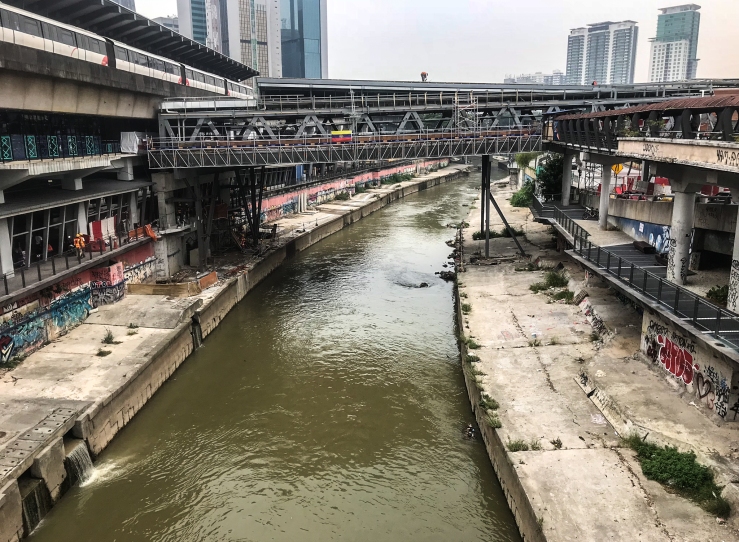 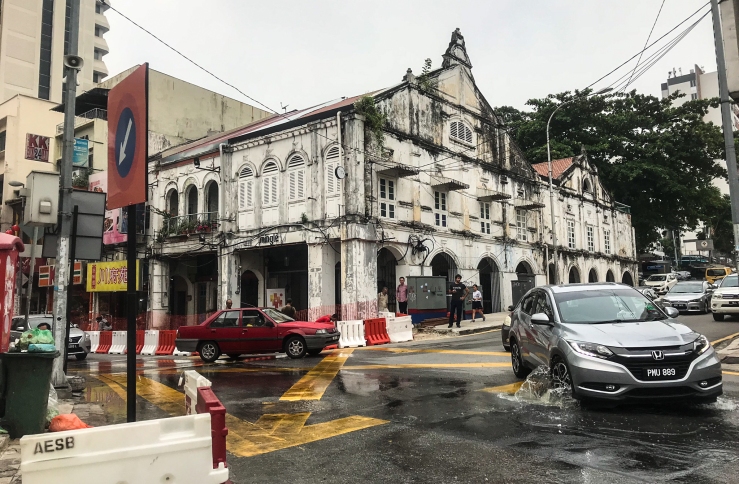 Jennifer was tired (understandable, as she got up and went to two major attractions while I woke up later and got going like a sloth), and I honestly felt like curling up in bed too because of how I’m feeling lately, but I pushed myself to go out and do one more thing.  The key to me getting out was ordering an Uber ride, because knowing someone was going to come and pick me up kept me committed to going out. Haha!

I wanted to do a few things that made sense to do at a mall, so that’s where I went for the evening (well, evening for me, which is 7-10pm).  There was a cool display for Chinese New Year that gave information about the heritage and history of common Chinese last names and it was fun to walk around and read them. 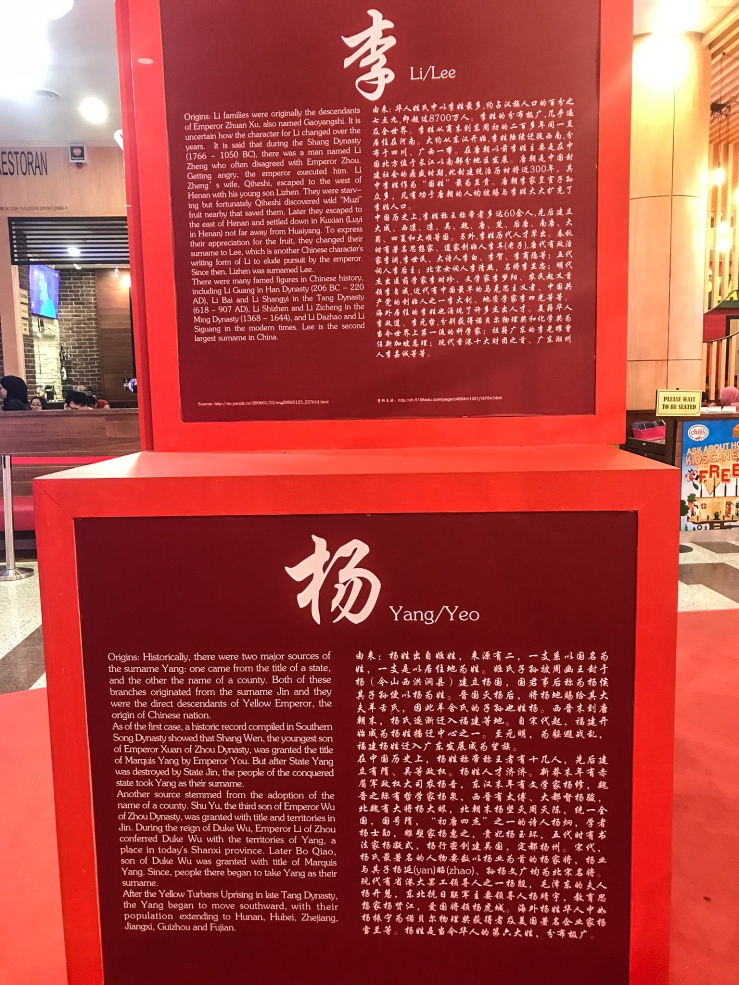 Part of my mall-venture was finding sushi that was tasty but not expensive.  I know, I know, I wasn’t eating authentic Malay food while in Malaysia, but it’s been a while since I had Japanese food and I couldn’t resist. 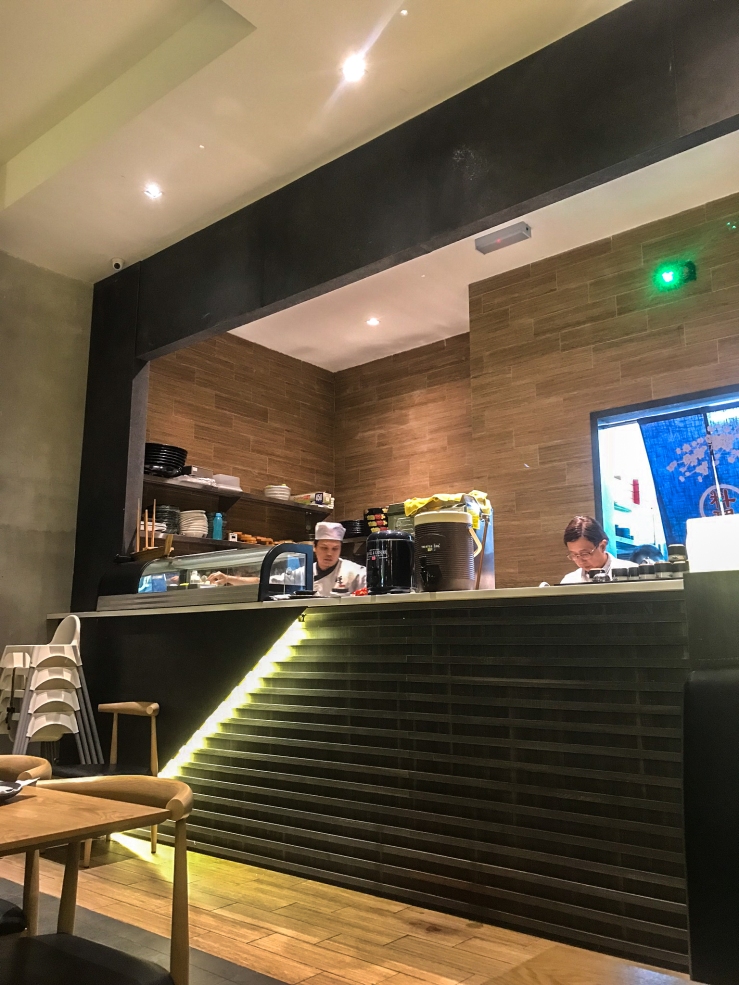 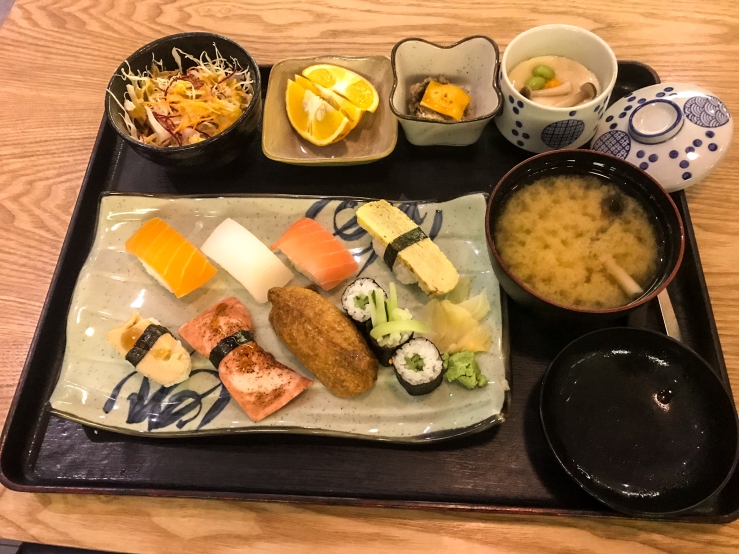 The mall had some cool architecture that I forgot to photograph (I only brought my phone with me), but it’s shaped like a big red sphere and has 7 stories.  I am not really a mall person, but for some reason it’s been fun to visit malls in different places.  I think it’s because malls have a standardized kind of feel, and it ends up being an unexpected place to notice cultural differences.

I stopped by a supermarket attached to the mall to buy some fresh vegetables.  I am so happy about the abundance of fruit everywhere, but man I miss eating tons of fresh veggies every day! 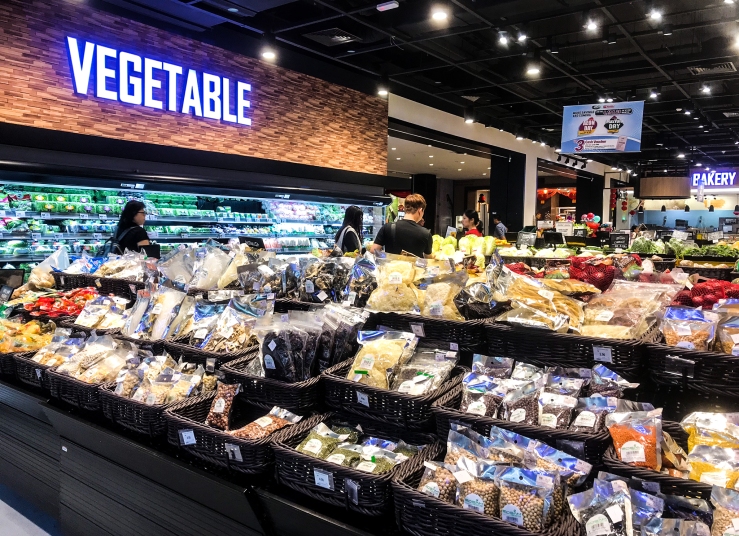 Grocery stores are also a place I find fun to observe culture.  Again, it’s something so familiar, and you spot the differences so quickly.  Yes, obviously I’m the most exposed to new and unique cultural things when I’m on the streets of the city or traveling on the outskirts in different towns, but in that case it is all so new that it can be overstimulating for me.  In these cases, there are subtle things that become louder and it’s exciting to experience.

I got back around 10 via Uber.  My rides there and back were both enjoyable!  The drivers were both super sweet, and though I tend to be shy and awkward, I have become so much better at engaging with strangers over the course of this trip.  The first driver was a guy who teaches elementary science and math, and we laughed about our own experiences with teachers and our own memories of being in school.  The second driver spoke less English, but it had been raining and thundering earlier in the day and I brought up how much I love it because I never get to experience it where I’m from.  He thought that was hilarious.

We’ve got 1.5 days left in Kuala Lumpur before we head a bit north!  And just to keep you a bit more in the loop, we will be headed to Shanghai on March 8 and will be visiting a total of 4 cities in China over 3 weeks.  Then we head to South Korea for a little while (Jennifer leaves April 2 and I leave April 8)…. and then back to Portland… Not trying to get ahead of myself, it’s just crazy how time flies.  And also so weird how it feels like such a long time ago that we were in Bangkok.  To me it feels like it could have been a year ago. Time is so weird, especially to me with the way my brain works.  I’ll get back, and it will probably feel like a mix of returning to some long ago past life and also like everything is carrying on and I never left.  This trip may feel like some magical bubble of time that isn’t part of my timeline but rather floating around in space… yeah, I won’t get into my philosophy on how and why we experience time the way we do, nor will I go on and on about my own experiences, but maybe sometime I’ll write more about it… who knows.

And wow I went on a tangent. Oops…

I’m thankful for the internet and modern technology (very very vague term – I’ll just assume you get my point) and the ability to share and save all of these things so easily and immediately.  What a wondrous time we live in!